I just  love  to mix and paint. So much so that I mixed two more different  shades of zinc chromate and tried  them  on.

I wasn’t sure I had the right shade after looking at these pictures. 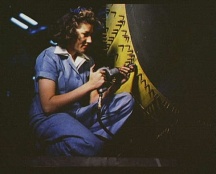 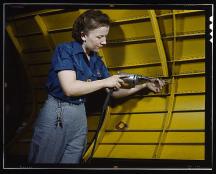 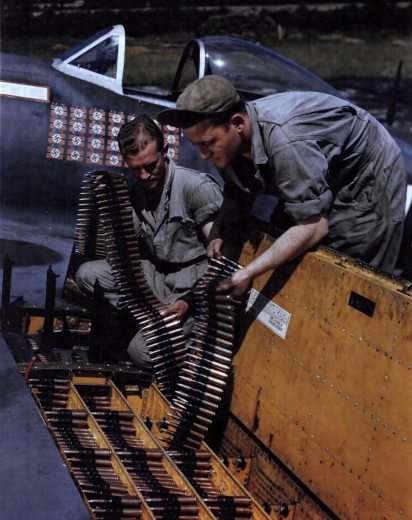 And this on the Internet.

Factory instructions for the P-61 stated that all exposed interior surfaces of the pilot, gunner and navigator compartments were to be finished in Northrop Cockpit Green, another factory-specific variant of Interior Green. Instrument panels were to be finished in flat black. Interior surfaces visible from the outside carried the same finish as the outside of the aircraft.

Zinc Chromate Yellow was used as general finish of all unexposed interior surfaces of the P-61. Even the wheel wells were finished in this colour. Two exceptions were the inner surfaces of engine cowlings and the firewalls which were left unpainted.

Click here for more about the restoration of a P-61 with lots of pictures of the interior colors.

I started with forest green then I added yellow.

Not quite the right shade!

Finally I had mixed so much zinc chromate that I decided to try it on the P-61. 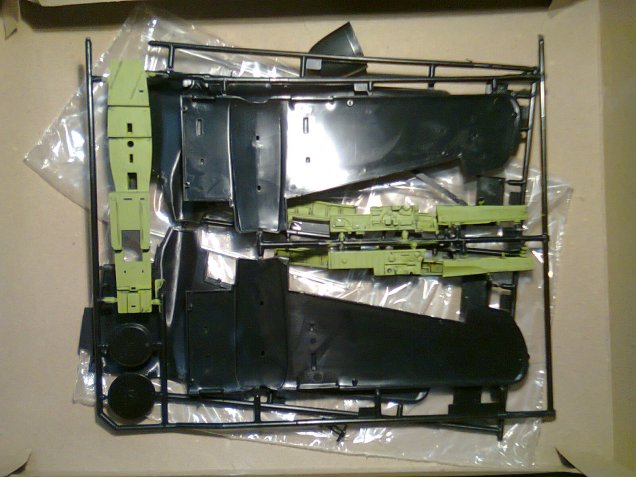 I just love to mix and paint.

The Northrop P-61, was shrouded in secrecy from its inception. Known as the “BLACK WIDOW”, it was the first U.S. aircraft designed exclusively as a night fighter. The P-61 was the heaviest aircraft to ever bear the designation “P” for pursuit, with its initial weight of over 27,400 pounds. Specifications of the WIDOW were those of a medium bomber, with a wing span of 66 feet and an overall length of 48 feet 11 inches. Two Pratt and Whitney R 2800 engines powered the P-61A developing initially 1600 horse-power each. The P-61B had two R2800-65 engines, with an increased horsepower of 2200 each. Top speed of this aircraft was over 370 miles per hour. 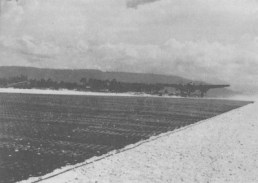 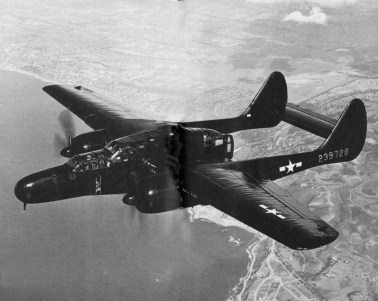 The P-61 was the most advanced night fighter of its day, possessing incredible capabilities of destruction. Four .50 calibre machine guns were mounted in a dorsal turret and four 20 millimeter cannons in the ventral location on the fuselage pod. The four .50 calibre machine guns were designed initially as defensive weapons and could be controlled by any one of the three crew members, pilot, rear gunner, or radar operator who sat in the extreme rear of the fuselage pod. The dorsal gun turret could be rotated 360° and elevated to a 90″ angle.

The P-61B was approximately 8 inches longer than the “A” model, its overall length being 49 feet 7 inches. Of the four hundred-fifty “B’s” produced, only the second two hundred had the dorsal turret which was re-introduced. The buffeting problem had been lessened by redesign of the structure. The P-61 B also incorporated many improvements requested by pilots who had used the P-61A in combat.

The P-61B was painted an overall gloss black as were many P-61A’s, although initially the P-61A was painted in the conventional olive drab over neutral gray. The P-61B, when painted a glossy black, was almost invisible in the night skies.

History of the 418 Night Fighter Squadron

On December 29th, 1944, Major Smith and his radar operator, Lt. Phillip Porter, accomplished a feat unheard of in night fighter history as they intercepted and destroyed four Japanese aircraft in a single night with their P-61, “Times A Wastin’ “. With these four Japanese aircraft, destroyed off the coast of Mindoro in the Philippines, Major Smith became the highest scoring U.S. Night Fighter Ace with a total of seven kills.

This accurately detailed model was designed from authentic drawings and photos taken of the P-61 at Wright Patterson Air Force Base. Also much technical information was furnished by Ronald C. Harrison and Garry R. Pape. They are coauthors of a soon to be released book, “Black Widow—Queen of the Midnight Skies.”

This is the story of the design and development of the P-61 and the American night fighter squadrons of World War II. 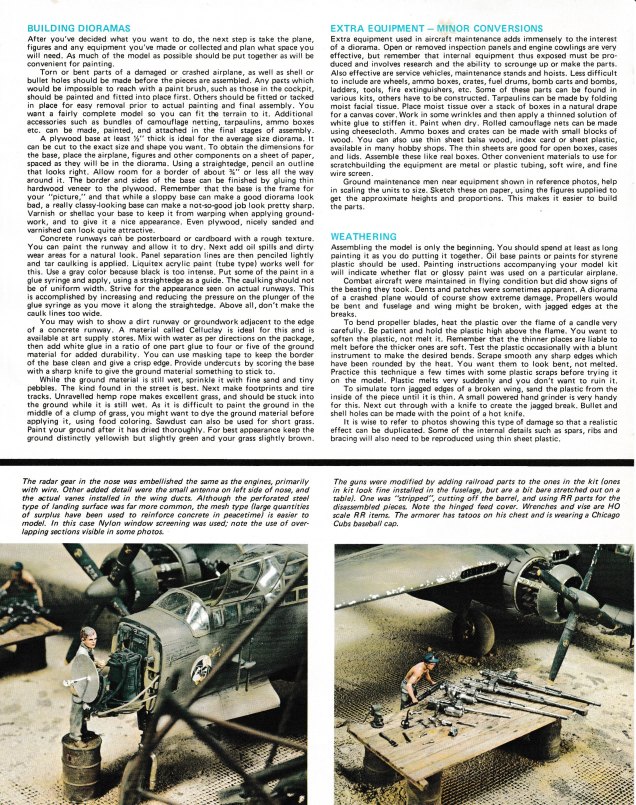 Dated 1960. Has sunburst oval logo without the ‘Famous Fighters’ so this is likely from 1963/64. Large 1/48 scale kit with fantastic Jo Kotula artwork. For its time, it was a well detailed kit with good cockpit detail, three stations and crew and rotating propellers. Molded in black and clear with the correct clear two piece stand with a triangle ‘World’ base. Never started. Inventoried 100% complete with all parts, decals and instructions.

My first encounter with the Black Widow was in the mid 60s. There was this convenience store who had model airplanes kits for sale. Most were Auroras if I can remember correctly.

I vividly remember these box tops…

There were also these…

But the Black Widow was the most impressive. I never bought it so years later when Monogram came out with this one in the mid 70s, I bought it and built it.

So this project is like déjà vu but with a more experienced modeller 40 years later.

The P-47D project is finally done. 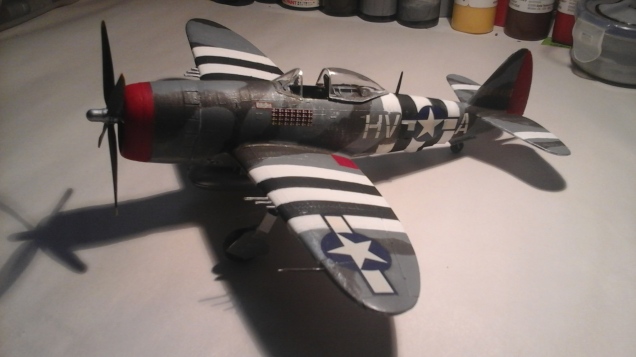 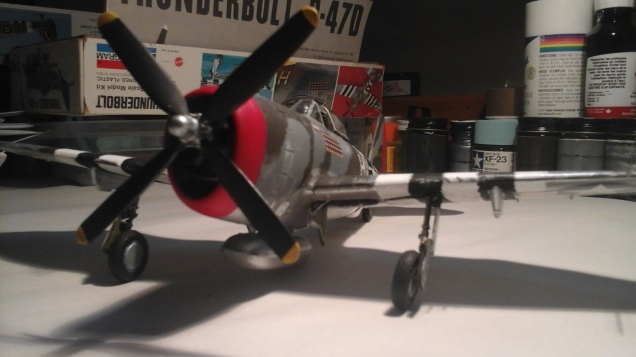 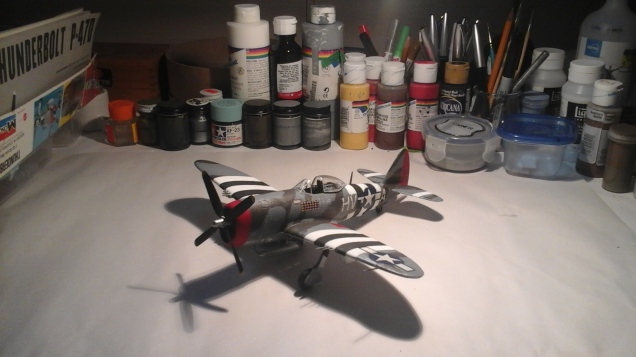 It’s time for the next one…

Then the one after that…

Choosing is sometimes  the hardest part in model building. I found an easy  way…

Coming  soon after the Black  Widow. 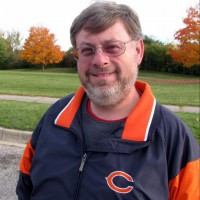 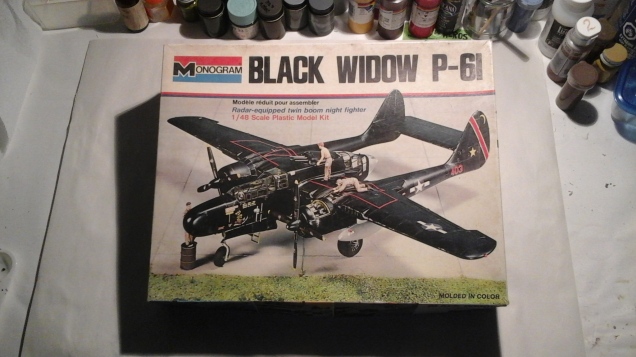 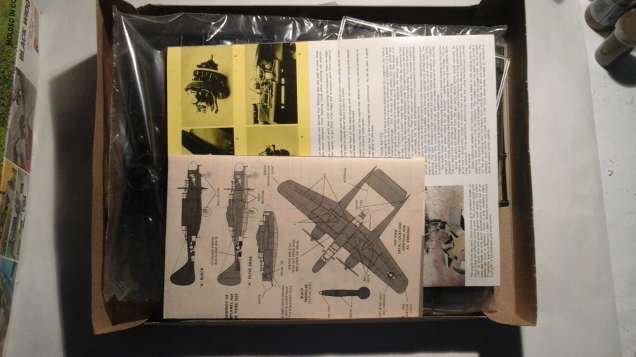 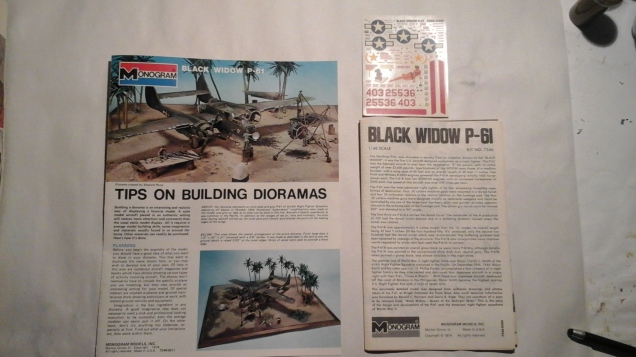 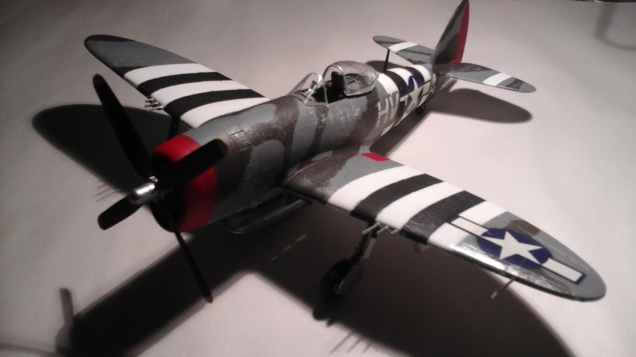 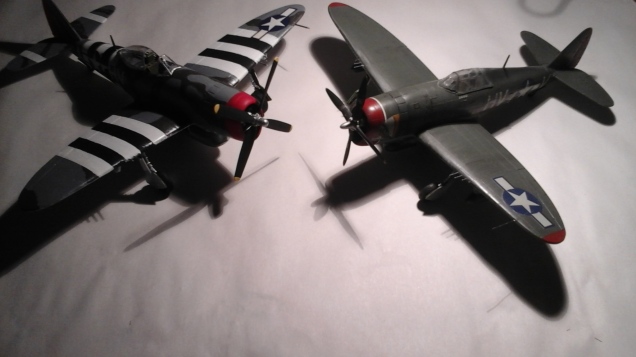 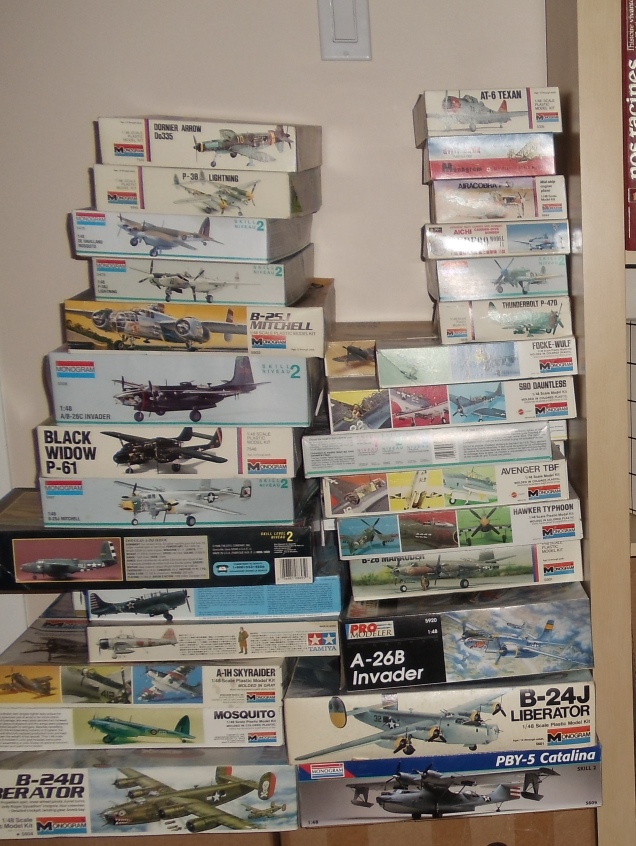 To help you decide…